I’m developing an open source data mode using a FSK modem and powerful LDPC codes. The initial use case is the Open IP over UHF/VHF project, but it’s available in the FreeDV API as a general purpose mode for sending data over radio channels.

It uses 2FSK or 4FSK, has a variety of LDPC codes available, works with bursts or streaming frames, and the sample rate and symbol rate can be set at init time.

The FSK modem has been around for some time, and is used for several applications such as balloon telemetry and FreeDV digital voice modes. Bill, VK5DSP, has recently done some fine work to tightly integrate the LDPC codes with the modem. The FSK_LDPC system has been tested over the air in Octave simulation form, been ported to C, and bundled up into the FreeDV API to make using it straight forward from the command line, C or Python.

We’re not using a “black box” chipset here – this is ground up development of the physical layer using open source, careful simulation, automated testing, and verification of our work on real RF signals. As it’s open source the modem is not buried in proprietary silicon so we can look inside, debug issues and integrate powerful FEC codes. Using a standard RTLSDR with a 6dB noise figure, FSK_LDPC is roughly 10dB ahead of the receiver in a sample chipset. That’s a factor of 10 in power efficiency or bit rate – your choice!

The performance is pretty close to what is theoretically possible for coded FSK [6]. This is about Eb/No=8dB (2FSK) and Eb/No=6dB (4FSK) for error free transmission of coded data. You can work out what that means for your application using:

So if you were using 4FSK at 100 bits/s, with a 6dB Noise figure, the Minimum Detectable Signal (MDS) would be:

Given a 3kHz noise bandwidth, the SNR would be:

Here is the FSK_LDPC frame design:

At the start of a burst we transmit a preamble to allow the modem to syncronise. Only one preamble is transmitted for each data burst, which can contain as many frames as you like. Each frame starts with a 32 bit Unique Word (UW), then the FEC codeword consisting of the data and parity bits. At the end of the data bits, we reserve 16 bits for a CRC.

This figure shows the processing steps for the receive side:

The Unique Word (UW) is a known sequence of bits we use to obtain “frame sync”, or identify the start of the frame. We need this information so we can feed the received symbols into the LDPC decoder in the correct order.

Even with pure noise (no signal) a random sequence of bits will occasionally get a partial match (better than our threshold) with the UW. That means the occasional dud frame detection. However if we dial up the threshold too far, we might miss good frames that just happen to have a few too many errors in the UW.

So how do we select the length of the UW and threshold? Well for the last few decades I’ve been guessing. However despite being allergic to probability theory I have recently started using the Binominal Distribution to answer this question.

Lets say we have a 32 bit UW, lets plot the Binomial PDF and CDF: 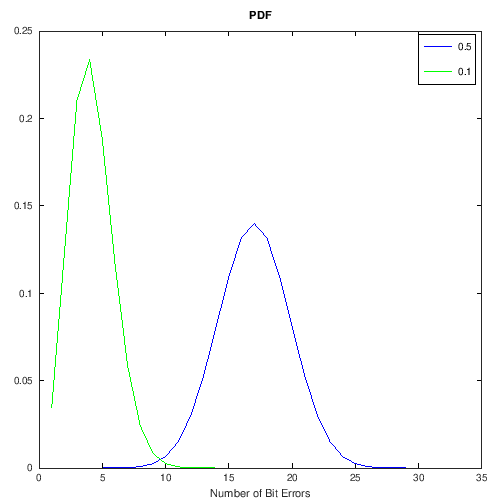 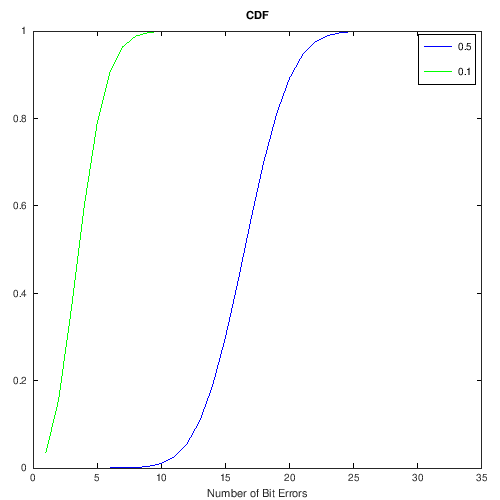 The x-axis is the number of errors. On each graph I’ve plotted two cases:

The CDF tells us “what is the chance of this many or less errors”. We can use it to pick the UW length and thresholds.

So there is a trade off between false detection on random noise, and missing valid frames. A longer UW helps separate the two cases, but adds some overhead – as UW bits don’t carry any payload data. A lower threshold means you are less likely to trigger on noise, but more likely to miss a valid frame that has a few errors in the UW.

Continuing our example, lets say we try to match the UW on a stream of random bits from off air noise. Because we don’t know where the frame starts, we need to test every single bit position. So at a bit rate of 1000 bits/s we attempt a match 1000 times a second. The probability of a random match in 1000 bits (1 second) is 1000*2.6E-4 = 0.26, or about 1 chance in 4. So every 4 seconds, on average, we will get an accidental UW match on random data. That’s not great, as we don’t want to output garbage frames to higher layers of our system. So a CRC on the decoded data is performed as a final check to determine if the frame is indeed valid.

Putting it all together

We prototyped the system in GNU Octave first, then ported the individual components to stand alone C programs that we can string together using stdin/stdout pipes:

Yeah I know. But it’s in there. Trust me.

The command line programs above are great for development, but unwieldy for real world use. So they’ve been combined into single FreeDV API functions. These functions take data bytes, convert them to samples you send through your radio, then at the receiver back to bytes again. Here’s a simple example of sending some text using the FreeDV raw data API test programs:

The “2>/dev/null” hides some of the verbose debug information, to make this example quieter. The 0x11c6 at the end is the 16 bit CRC. This particular example uses frames of 32 bytes, so I’ve padded the input data with spaces.

My current radio for real world testing is a Raspberry Pi Tx and RTLSDR Rx, but FSK_LDPC could be used over regular SSB radios (just pipe the audio into and out of your radio with a sound card), or other SDRs. FSK chips could be used as the Tx (although their receivers are often sub-optimal as we shall see). You could even try it on HF, and receive the signal remotely with a KiwiSDR.

I’ve used a HackRF as a Tx for low level testing. After a few days of tuning and tweaking It works as advertised – I’m getting within 1dB of theory when tested over the bench at rates between 500 and 20000 bits/s. In the table below Minimum Detectable Signal (MDS) is defined as 10% PER, measured over 100 packets. I send the packets arranged as 10 “bursts” of 10 packets each, with a gap between bursts. This gives the acquisition a bit of a work out (burst operation is typically tougher than streaming):

The Si4464 is used as an example of a chipset implementation. The Rx sensitivity figures were extrapolated from the nearest bit rate on Table 3 of the Si4464 data sheet. It’s hard to compare exactly as the Si4664 doesn’t have FEC. In fact it’s not possible to fully utilise the performance of high performance FEC codes on chipsets as they generally don’t have soft decision outputs.

With a decent LNA in front of the RTLSDR, I measured MDS figures about 4dB lower at each bit rate. I used a rate 0.5 code for the tests to date, but other codes are available (thanks to Bill and the CML library!).

There are a few improvements I’d like to make. In some tests I’m not seeing the 2dB advantage 4FSK should be delivering. Syncronisation is trickier for 4FSK, as we have 4 tones, and the raw modem operating point is 2dB further down the Eb/No curve than 2FSK. I’d also like to add some GFSK style pulse shaping to make the Tx spectrum cleaner. I’m sure some testing over real world links will also show up a few issues.

It’s fun building, then testing, tuning and pushing through one bug after another to build your very own physical layer! It’s a special sort of magic when the real world results start to approach what the theory says is possible.

[1] Open IP over UHF/VHF Part 1 and Part 2 – my first use case for the FSK_LDPC protocol described in this post.

[2] README_FSK – recently updated documentation on the Codec 2 FSK modem, including lots of examples.

[3] README_data – new documentation on Codec 2 data modes, including the FSK_LDPC mode described in this post.

[4] 4FSK on 25 Microwatts – Bill and I sending 4FSK signals across Adelaide, using an early GNU Octave simulation version of the FSK_LDPC mode described in this post.

[6] Coded Modulation Library Overview – CML is a wonderful library that we are using in Codec 2 for our LDPC work. Slide 56 tells us the theoretical mininum Eb/No for coded FSK (about 8dB for 2FSK and 6dB for 4FSK).