Based on digital endocranial cast models the canine brain does not increase proportionally with body size. Researchers at ELTE Eötvös Loránd and Kaposvár University in Hungary reconstructed the surface morphology of 28 canine brains, including various dog breeds, wolves, coyotes, and jackals. The shortening of the facial skeleton greatly influences the ratio of certain brain regions, primarily the olfactory bulb and the frontal lobe. These changes might have profound implications for olfactory and problem-solving abilities.

Reconstructing the brain based on the internal surface patterns of a skull is a well-known method among archeologists studying the brains of extinct species, e.g.  dinosaurs, mammoths and even cavemen. One way to achieve a model of the brain is to fill the endocranial space with specific gradually hardening fluids, and after the solidifying of the material the bones can be removed to reveal the cast, which reflects the surface of the brain with high fidelity. These are called endocranial casts, or endocasts.

Nowadays, rather than utilising endocasts, invasive process diagnostic imaging techniques are highly preferred. Computer tomography (CT) is the best and easiest way to visualize the bones, with all of their external and internal structures and composition. Using CT is also advantageous in endocranial analysis, as researchers can create virtual endocasts based on the digitized skulls. This allows for a higher freedom during examinations, because these virtual models can be rotated, colorized, cut, and completed. They can be shown not only on mobile phones, tablets or computers, but with the help of 3D-printing technology one can replicate them in the requested number and scale as well.

This digital endocasting technique was used by researchers from ELTE who scanned skulls from the collection of dr. Tibor Csörgő (ELTE, Department of Anatomy, Cell and Developmental Biology), which comprises almost 400 dog skulls from 152 canine breeds. “Due to the high resolution scanning, detailed 3D models could be created. This means that not only the main convolutions, that is, the cerebral gyri, can be recognized on the final model, but the location of the major blood vessels can also be seen on the surface.” – explains dr. Kálmán Czeibert, veterinarian and postdoctoral researcher at the Senior Family Dog Project, first author of the publication.

“We compared the shape, volume and surface features of the endocasts from 28 specimens in our recent study in Frontiers in Veterinary Science. These models clearly show how the shortening of the facial part of the skull affected the morphology of the brain, distorting the olfactory bulb, which is pushed back and underneath the frontal lobe in certain breeds (like the French bulldog or pug), changing the ratio between the cerebral areas.” 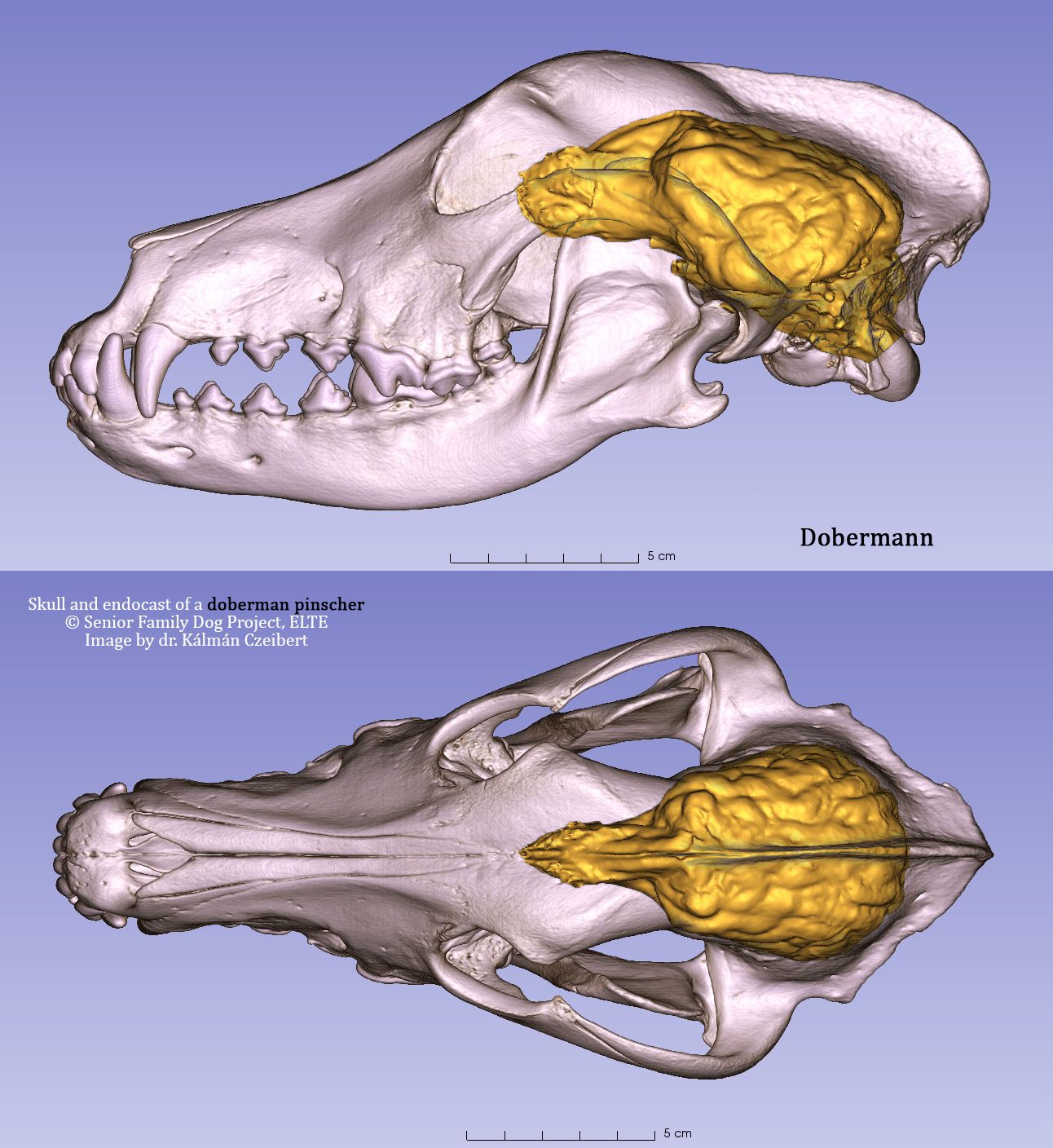 In order to clarify how this change affects dogs’ olfactory and cognitive performance, further imaging and behavioral investigations are needed. The new collection is part of the Canine Brain and Tissue Bank at ELTE, funded by a European Research Council (ERC) grant. The bank will help researchers to link the brain with behaviour. “In some areas, where volume has diminished, neuronal density and the relationship with other brain regions may act to counteract these changes. To further examine these speculations, behavioural testing, diagnostic imaging (like CT, MR or EEG), and histological and molecular assessment will be needed.” – said dr. Enikő Kubinyi, senior researcher at ELTE, principal investigator of the research group.

“One of our primary aims was the widespread dissemination of scientific knowledge.’ – adds dr. Czeibert. “How dog skulls and brains vary is striking. For example, despite the 30-fold difference in body weight between a Neapolitan mastiff and a chihuahua, their endocasts’ volumes have only a 2-fold difference.” The researchers from ELTE plan to increase the number of skulls by digitizing more specimens for microevolutionary studies in the framework of an international cooperation.