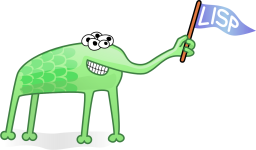 All libraries listed here are available from Quicklisp unless
stated otherwise. The ones marked with a are so widespread and
solid that they became community standards. You can’t be wrong with
them. This is the case for Quicklisp, BordeauxThreads and
such. Libraries denoted with a are the ones we like and want to
promote here at the Awesome-cl list. They proved solid, they may solve
a problem better than a community standard but they aren’t as
widespread, or not considered as stable. For example, we prefer
Spinneret over Cl-Who.

Add something new! See the contributing section for adding something to the
list.

This is released under the GNU Free Documentation License – its text
is provided in the LICENSE file. This repository is also mirrored on
NotABug – a fully-free (as in libre)
alternative to Github. Preference is given to free software and
sellers who aren’t evil for physical resources.

These are libraries for working with graphics, rather than making GUIs (i.e. widget toolkits), which have their own section.

For an overview and a tutorial on GUI toolkits, see the Cookbook/GUI.

See also this demo to use Java Swing from ABCL.

A large list of portability layers is collected here. Here are some of them:

The CLHS is available offline via an archive and as doc sets in Dash, Zeal and Velocity.

Interfaces to other package managers

See also asdf-sbcl, a plugin for the universal package manager.

There are more projects, more or less discontinued but interesting. See the other ressources.

See also the XML section below for xpath libraries and more.

Readline, ncurses and other graphical helpers

This contains plugins and other goodies for various text editors.

These are applications or bits of code that make development in Common Lisp easier without being Common Lisp libraries themselves.

This contains anything which doesn’t fit into another category.

Your contributions are always welcome! Please submit a pull request or create
an issue to add a new framework, library or software to the list.

The rules we (try to) respect are the followings: