Dale Chihuly (born September 20, 1941) is an American glass sculptor and entrepreneur. His works are considered to possess outstanding artistic merit in the field of blown glass, “moving it into the realm of large-scale sculpture.”[2] The technical difficulties of working with glass forms are considerable, yet Chihuly uses it as the primary medium for installations and environmental artwork.

Dale Patrick Chihuly was born on September 20, 1941, in Tacoma, Washington.[3] His parents were George and Viola Chihuly; his paternal grandfather was born in Slovakia.[3] In 1956, his older brother and only sibling, George, died in a Navy aviation training accident in Pensacola, Florida.[4] Two years later, in 1958, Chihuly’s father died of a heart attack at the age of 51.[5][6]

Chihuly had no interest in continuing his formal education after graduating from Woodrow Wilson High School in 1959. However, at his mother’s urging, he enrolled at the College of Puget Sound[6] A year later, he transferred to the University of Washington in Seattle to study interior design. In 1961, he joined the Delta Kappa Epsilon fraternity (Kappa Epsilon chapter), and the same year he learned how to melt and fuse glass.[4] Chihuly became bored with his studies, and in 1962 he dropped out of the university to study art in Florence. He later traveled to the Middle East where he met architect Robert Landsman. Their meeting and his time abroad spurred Chihuly to return to his studies. In 1963, he took a weaving class where he incorporated glass shards into tapestries. He received an award for his work from the Seattle Weavers Guild in 1964.[4] Chihuly graduated from the University of Washington in 1965 with a Bachelor of Arts degree in interior design.[6]

Chihuly began experimenting with glassblowing in 1965, and in 1966 he received a full scholarship to attend the University of Wisconsin–Madison.[4] He studied under Harvey Littleton, who had established the first glass program in the United States at the university. In 1967, Chihuly received a Master of Science degree in sculpture. After graduating, he enrolled at the Rhode Island School of Design, where he met and became close friends with Italo Scanga. Chihuly earned a Master of Fine Arts degree in sculpture from the RISD in 1968. That same year, he was awarded a Louis Comfort Tiffany Foundation grant for his work in glass, as well as a Fulbright Fellowship.[4] He traveled to Venice to work at the Venini factory on the island of Murano, where he first saw the team approach to blowing glass.[7] After returning to the United States, Chihuly spent the first of four consecutive summers teaching at the Haystack Mountain School of Crafts in Deer Isle, Maine. In 1969, he traveled to Europe, in part to meet Erwin Eisch in Germany and Stanislav Libenský and Jaroslava Brychtová in Czechoslovakia.[4]
Chihuly donated a portion of a large exhibit to his alma mater, the University of Wisconsin, in 1997 and it is on permanent display in the Kohl Center. In 2013 the University awarded him a Honorary Doctorate of Fine Arts. 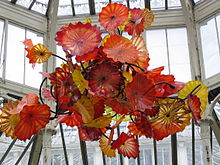 In 1976, while Chihuly was in England, he was involved in a head-on car accident during which he was propelled through the windshield.[8] His face was severely cut by glass and he was blinded in his left eye. After recovering, he continued to blow glass until he dislocated his right shoulder in 1979 while bodysurfing.[citation needed] No longer able to hold the glassblowing pipe, he hired others to do the work. Chihuly explained the change in a 2006 interview, saying “Once I stepped back, I liked the view,” and pointed out that it allowed him to see the work from more perspectives and enabled him to anticipate problems earlier. Chihuly’s role has been described as “more choreographer than dancer, more supervisor than participant, more director than actor.”[1]San Diego Union-Tribune reporter Erin Glass wrote that she “wonders at the vision of not just the artist Chihuly, but the very successful entrepreneur Chihuly, whose estimated sales by 2004 was reported by The Seattle Times as $29 million.”[9] Chihuly and his team of artists were the subjects of the documentary Chihuly Over Venice. They were also featured in the documentary Chihuly in the Hotshop, syndicated to public television stations by American Public Television starting on November 1, 2008.[10]

In 2006, Chihuly filed a lawsuit against his former longtime employee, glassblower Bryan Rubino, and businessman Robert Kaindl, claiming copyright and trademark infringement. Kaindl’s pieces used titles Chihuly had employed for his own works, such as Seaforms and Ikebana, and resembled the construction of Chihuly’s pieces. Arguments made by legal experts stated that influence on art style does not constitute copyright infringement.[11][12] Chihuly settled the lawsuit with Rubino initially,[13] and later with Kaindl as well.[14] 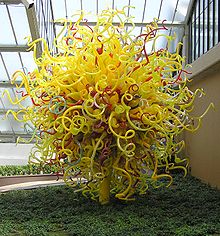 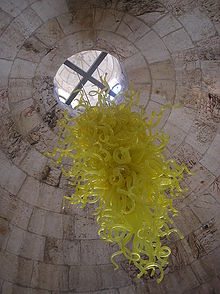 Regina Hackett, a Seattle Post-Intelligencer art critic, provided a chronology of Chihuly’s work during the 1970s, 1980s, and 1990s:

For his exhibition in Jerusalem, Israel in 2000, in addition to the glass pieces, he had enormous blocks of transparent ice brought in from an Alaskan artesian well and formed a wall, echoing the stones of the nearby Citadel. Lights with color gels were set up behind them for illumination. Chihuly said the melting wall represented the “dissolution of barriers” between people.[17] This exhibit holds the world record for most visitors to a temporary exhibit with more than 1.3 million visitors.[18]

Chihuly’s largest permanent exhibit can be found at the Oklahoma City Museum of Art. Chihuly maintains two retail stores in partnership with MGM Resorts International. One is located at the Bellagio on the Las Vegas Strip,[19] the other at the MGM Grand Casino in Macau.[20] A number of other galleries also carry his pieces. He also has a gallery in Las Vegas in the Crystals in the Las Vegas City Center in Gallery Row. In 1983 Chihuly returned to his native Pacific Northwest where he continued to develop his own work at the Pilchuck Glass School, which he had helped to found in 1971. Throughout the 1970s, influenced by the great glassblowing tradition of Murano, Chihuly experimented with the team approach to glassblowing. Working with a team of master glassblowers and assistants has enabled him to produce architectural glass art of a scale and quantity unimaginable working alone or with only one assistant. In 2010 the Space Needle Corporation submitted a proposal for an exhibition of Chihuly’s work at a site in the Seattle Center, in competition with proposals for other uses from several other groups.[21][22] The project, which sees the new Chihuly exhibition hall occupy the site of the former Fun Forest amusement park in the Seattle Center park and entertainment complex, received the final green light from the Seattle City Council on April 25, 2011.[23] Called Chihuly Garden and Glass, it opened May 21, 2012.[24][25]

Chihuly’s art appears in permanent collections all over the world, including in the United States (The Chihuly Collection housed in its own building on Central Ave in St Petersburg, Florida), Canada, England, Singapore, the United Arab Emirates, and Kuwait.