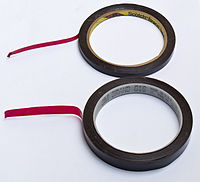 Rolls of lithographer’s tape (these rolls are made by 3M). The roll in the back is 1/4 inch, the one in the front, 1/2 inch width. These products are often called “Rubylith” tape because Rubylith has become a generic term for coloured masking films.

Rubylith is a brand of masking film, invented and trademarked by the Ulano Corporation. Today the brand has become genericized to the point that it has become synonymous with all coloured masking films.

Rubylith is used in many areas of graphic design, typically to produce masks for various printing techniques. For example it is often used to mask off areas of a design when using a photoresist to produce printing plates for offset lithography or gravure. It is also frequently used during screen-printing.

Ulano also produces a yellow coloured, masking film called Amberlith, that is not light safe but easier to use for masking when not employing a photoresist.

Rubylith was used in the early days of semiconductors and integrated circuits.[1] The physical layouts of the first generations of Intel microprocessors (the Intel 4004[2] and the Intel 8008 (née 1201)) were first hand drawn on graph paper. A technician would then use a coordinatograph to precisely cut the rubylith and a knife to peel the appropriate sections away. The finished Rubylith mechanical masters were then photo reduced up to 100 times and then step and repeated on to glass plates for production use. Shortly after the 8008, Intel started using Calma’s computer-aided design system that ran on a Data General minicomputer; the output masters may have stayed rubylith for a time, but other output options became available. Bell Telephone Laboratories, for example, had a high-resolution photoplotter.[3] The integrated circuit industry left rubylith for better technologies.

Certain digital image editing programs that have masking features may use a red overlay to designate masked areas, mimicking the use of actual Rubylith film.