In April of 1987, IBM announced the PS/2 line of systems. This was their advancement of the PC standard, but also an attempt come up with a new architecture that could not be cloned without paying a license fee. Of the new features announced, one of the most significant was the addition of MCGA, which created the 256-color mode 13h that we are so familiar with today. VGA was announced at the same time, which emulated all previous color standards including MCGA’s mode 13h.

This background is necessary to answer the following question: What was the first 256-color game on the PC? This was posed recently on a vintage gaming group on Facebook, but it’s a loaded question because it isn’t specific enough. It could mean any of the following:

The aforementioned facebook group conversation devolved into relying on memories and friendly arguments. This is always dangerous, because our minds are not static records. To get an answer out of memories, you need a very large group of people coming to a consensus; even then, that’s not guaranteed to be the correct answer, just an agreed-upon answer. (Some historians would argue that collective memory is the only record that matters, but a discussion of archiving history is out of scope for this article.) In that facebook conversation, and previously reported in various places like Wikipedia, the answer was 688 Attack Sub. The latest executable file date in that game is 1989-03-04. (For reference, all dates in this article are of the format YYYY-MM-DD). That seemed a little late to me; tech adoption moved a little more slowly back then, but even still, it seemed odd that it would take two years for the first game to come out to take advantage of a new graphics standard. Was 688 Attack Sub really the first to support the 256-color mode provided by MCGA and VGA?

Thanks to MobyGames and various archives floating around the internet, we can perform actual research to answer these questions, instead of relying on memory and friendly arguments (which is what the facebook conversation eventually devolved into). I co-founded MobyGames for many reasons, but the biggest reason was to answer questions like this, so I immediately took up the task. Here was my methodology:

Here’s what I found, in chronological file date order:

1987-06-08: Thexder‘s earliest shipped revision shows a date of 1987-06-08 on a file named MAINPS, which is the executable overlay that provides “PS/2 graphics support” (ie. MCGA, ie mode 13h). This was surprising to learn, as I assumed Sierra’s AGI games would have supported it first, but the first AGI games to support mode 13h to display graphics of any sort have VG_GRAF.OVL file dates of 1987-11-16 or later. Thexder uses mode 13h to display graphics using 16 custom colors chosen to approximate how the game looks when running in its “best” mode, EGA 640×200. 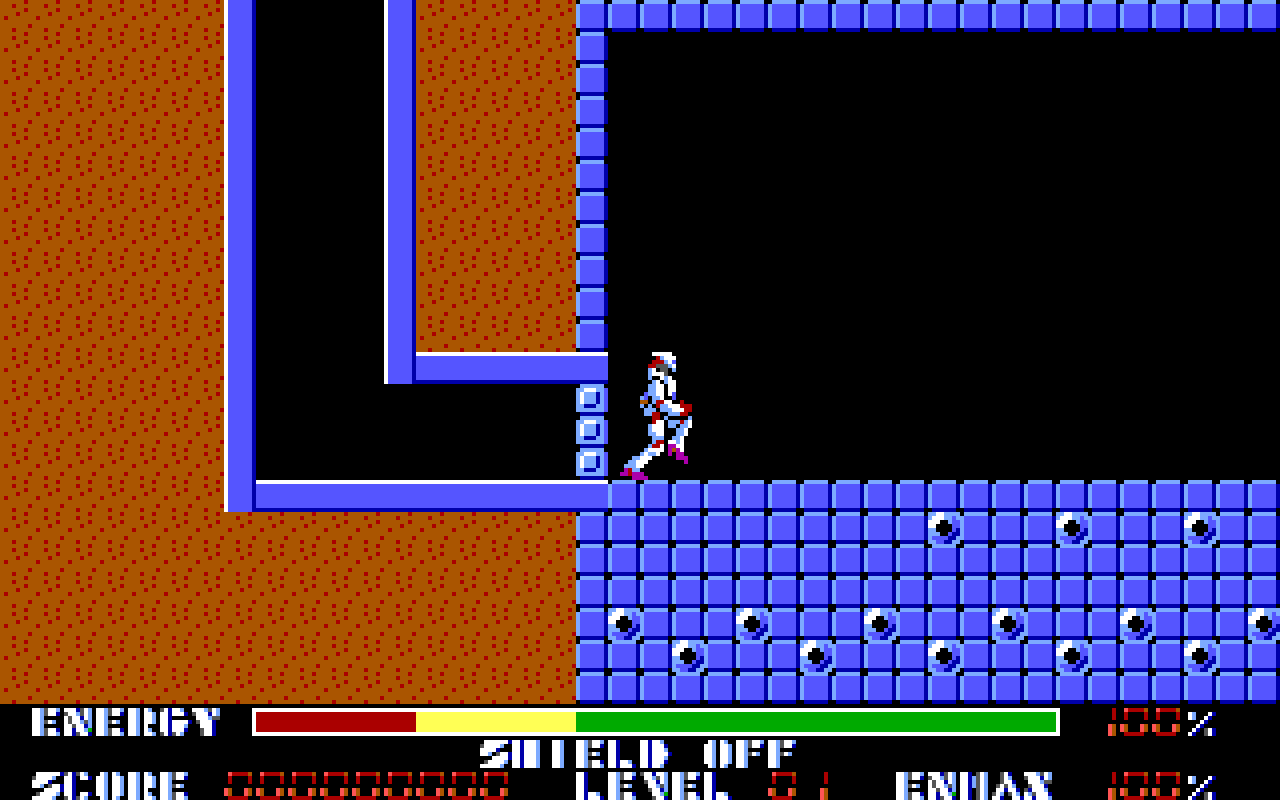 1987-12-16: Rockford: The Arcade Game displays 32 colors onscreen at once. (32 is significant; see Conclusions at the end of this article for an explanation.) 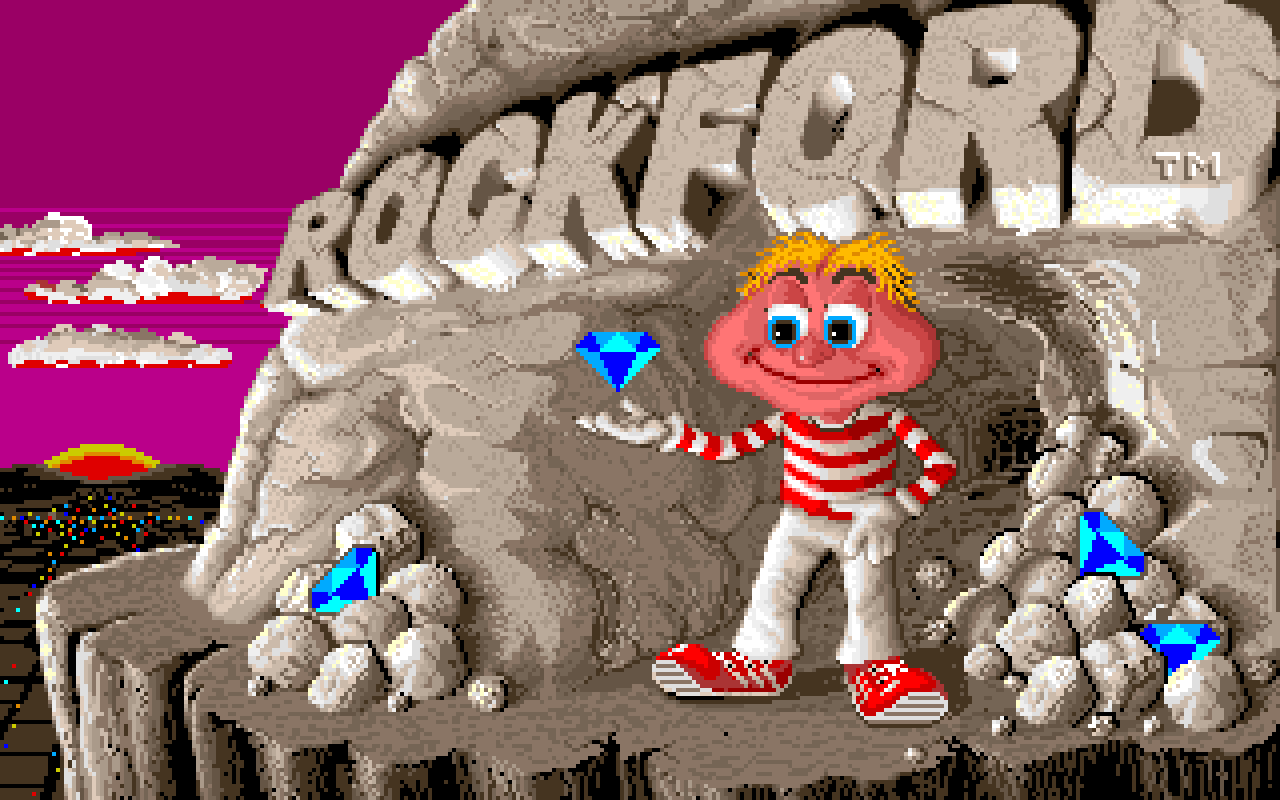 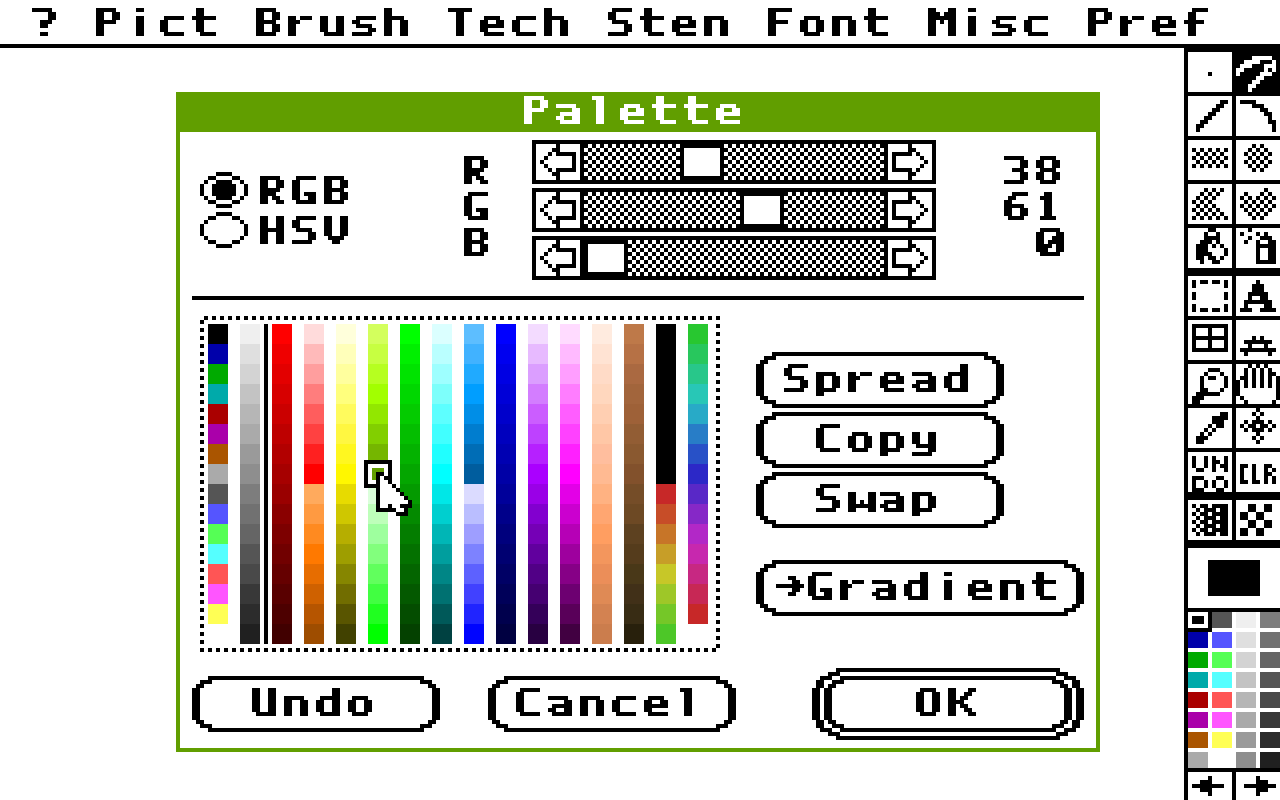 1988-10-05: Dream Zone uses digitized 16-gray-shade graphics as part of gameplay, then managed to eek out using one additional color when drawing the interface, for a total of 17 colors onscreen. This game is included here not because it is a serious contender in our research, but rather because it was the earliest PC game I could find that used digitized graphics that also used the MCGA palette registers to create a custom color palette — or, at the very least, used any of the default 256 colors that are created when mode 13h is initialized. (This beats out Moebius on the PC which has a later executable date.) Dream Zone is also notable in that it was created by the founders of Naughty Dog when they were 20 years old. 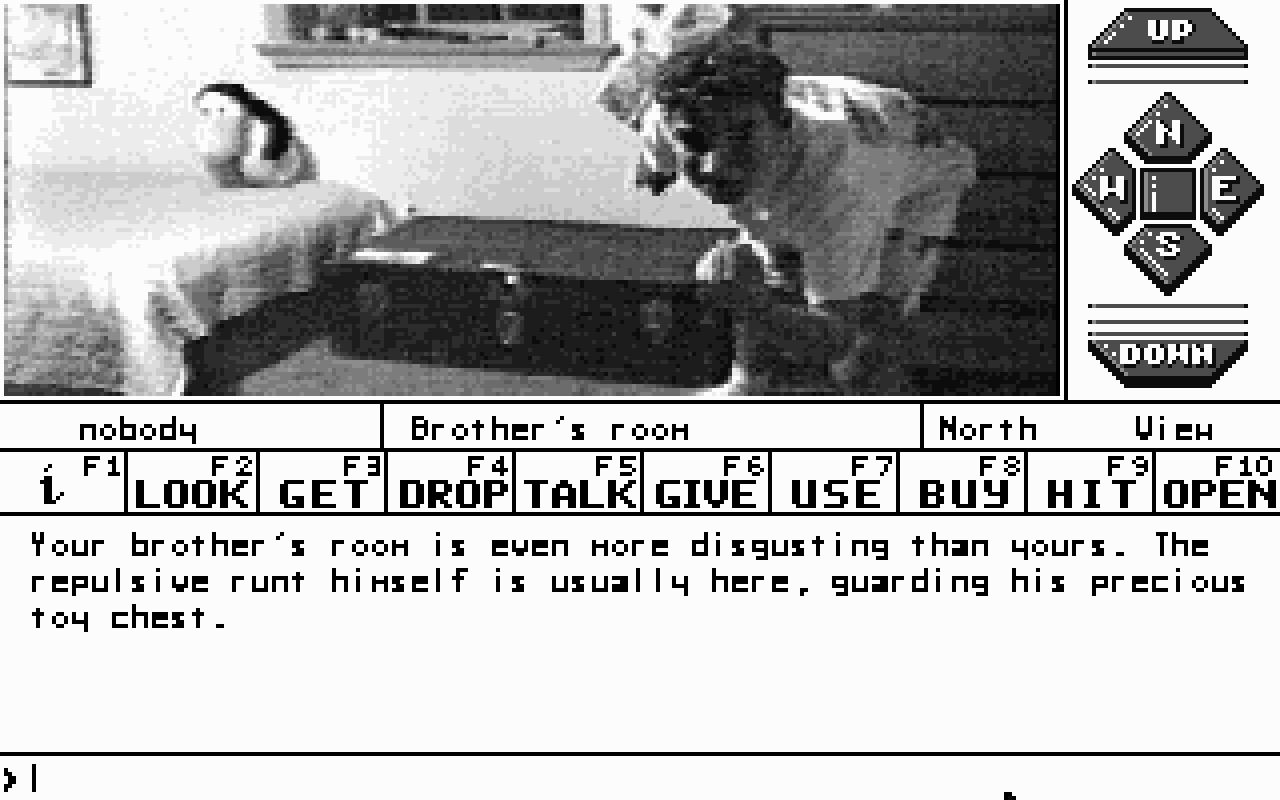 1988-10-15: F-19 Stealth Fighter rasterizes the 3-D graphics using mostly the same 16 colors as as EGA during action gameplay, but when playing the game using MCGA, it uses the extra colors to draw the cockpit graphics using many color shades. This brings the number of colors up to 52 onscreen at once in typical gameplay. 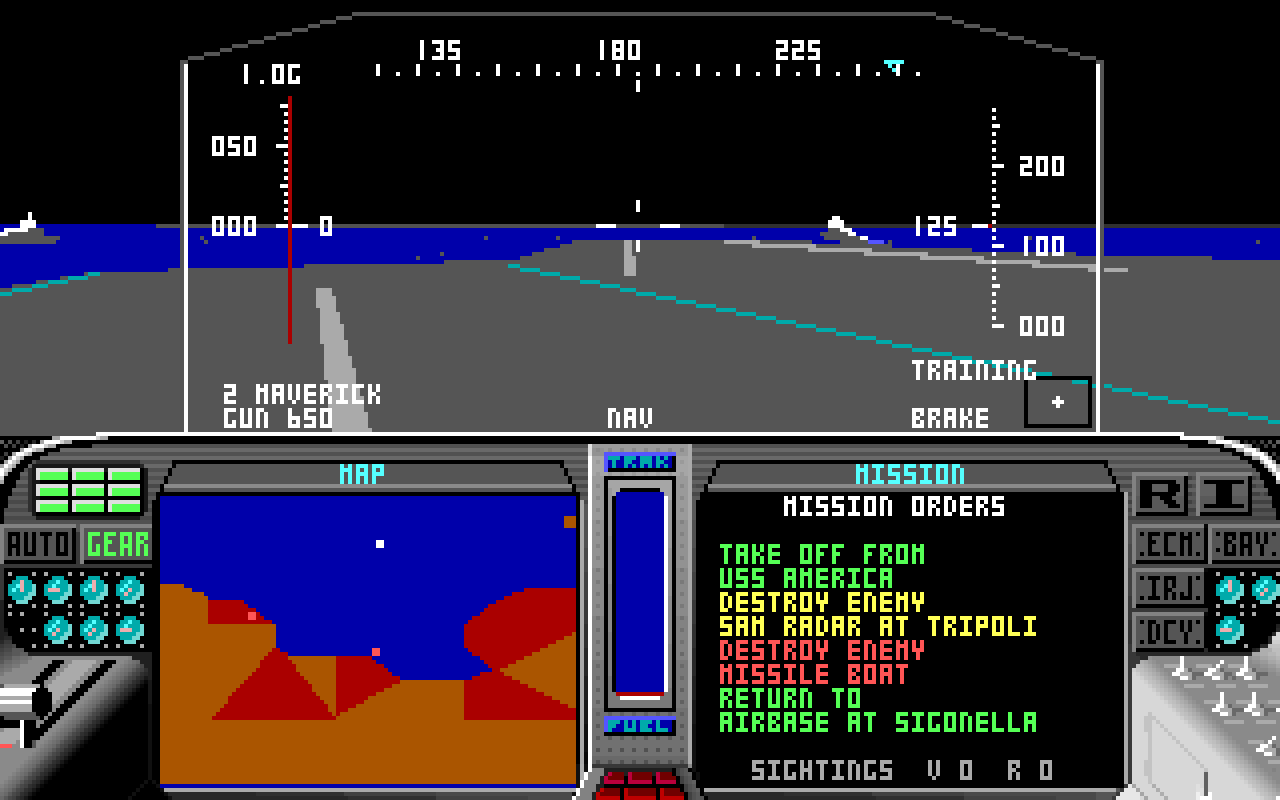 1989-03-04: 688 Attack Sub starts off with a 210-color title screen and then uses many colors throughout gameplay: The Soviet control room (also pictured below) uses 73 colors; other screens produce a 16-color interface while an additional 16-element grayscale digitized picture is also shown; all elements of gameplay use a custom palette. 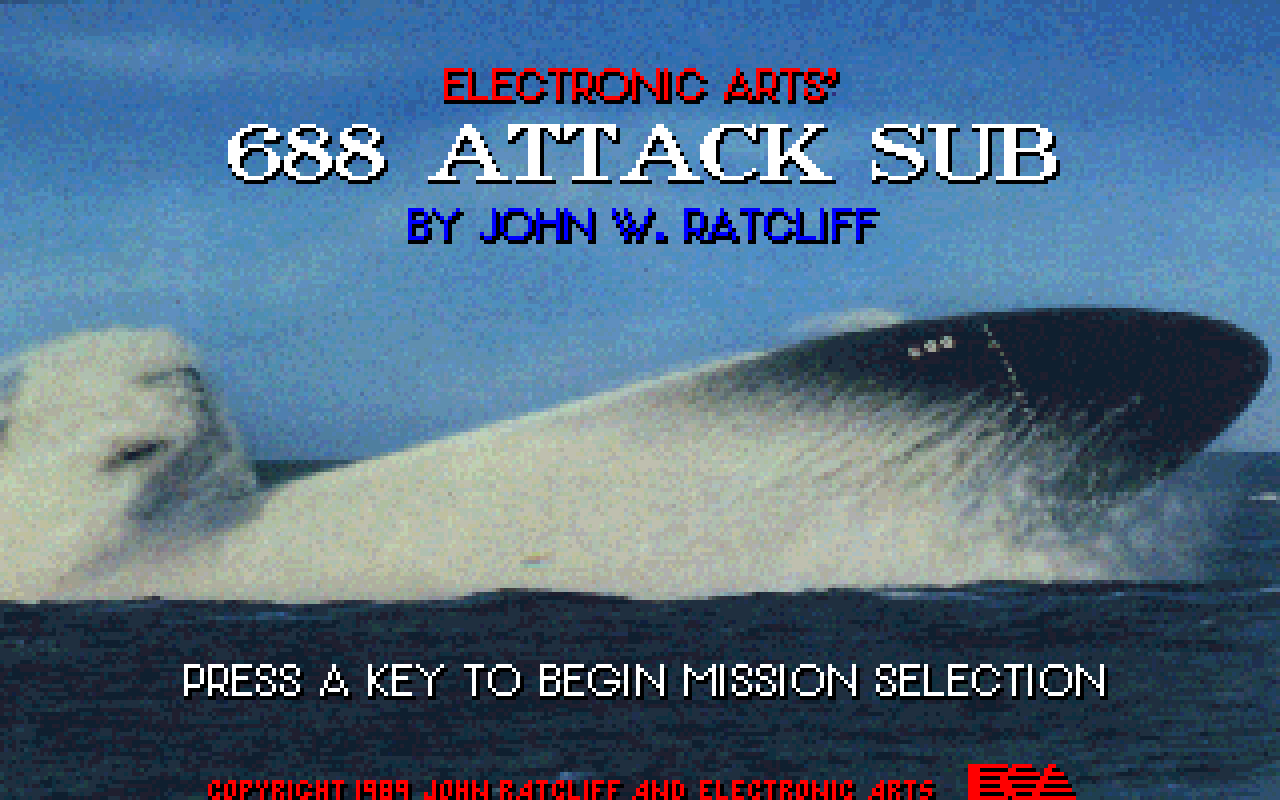 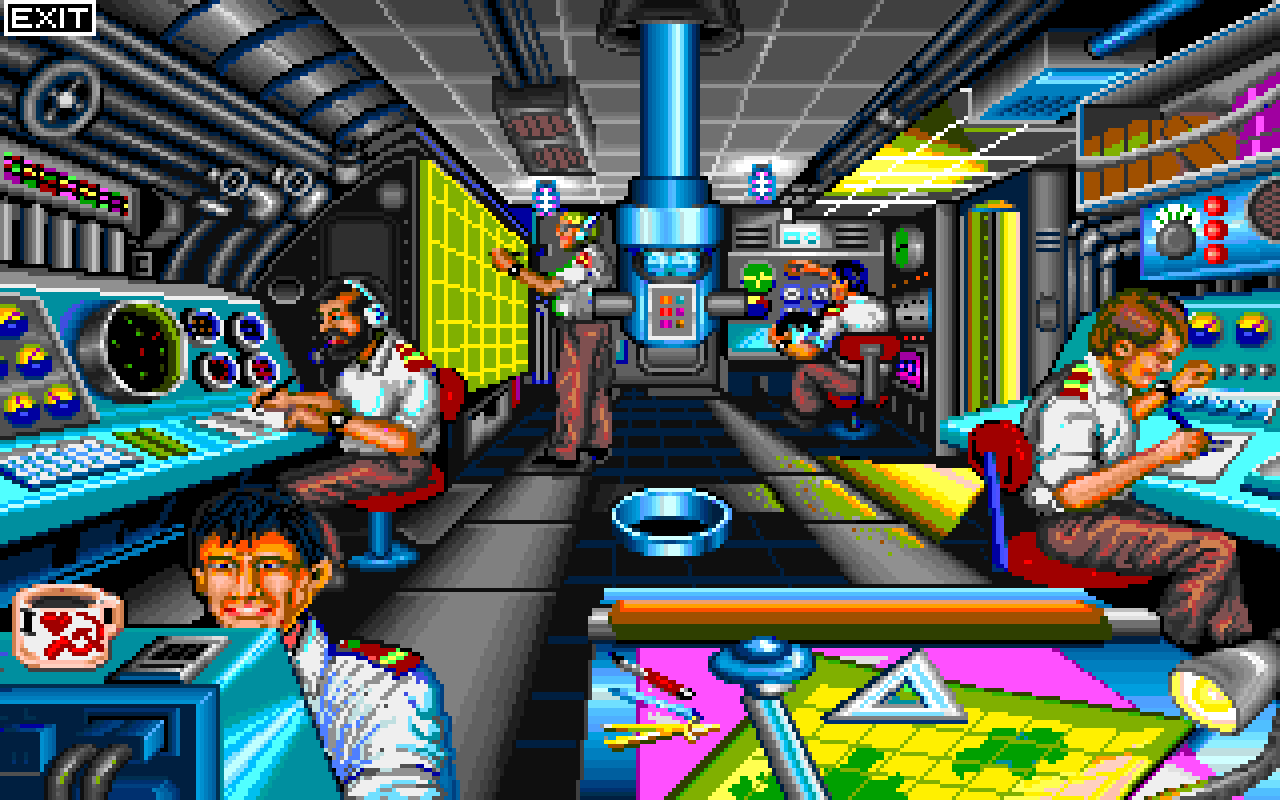 Based on the above, let’s answer the questions we originally posed:

Based on the above research, and my personal experience during this time period (if my own memory can be trusted), I can expand on these results with a little historical context. Consider this the “trivia” section of the article.

The “VGA” support in Thexder is truly MCGA support; this is reflected in the name of the graphics overlay, MAINPS, the PS part referring to mode 13h support as “PS/2 graphics” before the rest of the industry just started calling mode 13h “VGA graphics”. But if VGA also supports mode 13h, why don’t you see MCGA graphics when running Thexder on VGA systems? This is because the game is programmed to prefer EGA graphics over other display standards. Thexder’s native graphics are 640×200 in 8 colors as ported over from the original NEC PC-8801 version, which the developer emulated by running the game in EGA 640x200x16 mode. The developer felt the game looked best in its original graphics, so it shows the game that way on any system that can support EGA — and early PS/2 systems didn’t support VGA, only MCGA. So, the only way you can see the MCGA code/colors kick in is if you run it on an IBM PS/2 Model 25 or Model 30-8086, the only systems with MCGA graphics. If you don’t have one of these systems, you can force MCGA graphics to kick in by making a copy of your disk and then copying MAINPS to MAINEG, which will replace the EGA graphics code with the MCGA graphics code.

Rockford: The Arcade Game uses exactly 32 colors. Why is this interesting? Because it shows that the graphics were composed on an Amiga (most Amiga games were 32 colors), and instead of downconverting them to 16 colors like most PC ports did in the 1980s (see Airball for a typical example), the developer decided to support mode 13h so that all 32 colors could be displayed exactly. (Interestingly, the Amiga version of Rockford was released after the PC version.)

F-19 only barely supported mode 13h. It was a nice touch to draw the instrument panel using 32 shades of gray, but this is the only place in the game where additional colors are used. It serves the letter of the law, but not the spirit of the law.

688 Attack Sub makes use of DeluxePaint fonts on all versions of its title screen, which means it used DeluxePaint during development. Also, an earlier demo of the game while it was still being developed (date is 1988) shows that it originally did not fully support 256-color graphics (in the linked screenshot, the background uses multiple colors, but the foreground elements were definitely drawn to the default 16-color palette). Was support of mode 13h in 688 Attack Sub considered only after a paint program existed they could use to create such graphics? Hopefully John Ratcliff, Michael Kosaka, or Wilfredo Aguilar can clarify the development timeline.

I referred to 256-color mode as “mode 13h” because that’s the exact MCGA video mode in use for all games listed above. Later games used VGA’s flexibility to create 256-color modes in higher resolutions, or with multiple video pages, or split-screen, etc. but these were truly limited to VGA, and didn’t show up until 1990 or later. So I chose the exact technical term because it defined a consistent scope to use for comparisons. (If you want to do your own research down the rabbit hole of “What was the first game to tweak VGA into new video modes?” then you can use MobyGames to start that journey.

All of these answers are to the letter of the law, but not necessarily to the spirit of the law. In my completely subjective and unscientific opinion, the first PC game to truly show off MCGA with 200+ colors on every single screen is Mean Streets (because most of the screens were digitized in some way). Coupled with crude video sequences, and the ability to run at a decent speed on an IBM PS/2 Model 25, it’s a great early game to show off what MCGA was capable of.

MobyGames information may not be complete for the time periods researched. Given the nature of recording history, it may never be complete. If you feel I missed something, please contribute the missing game(s) to MobyGames so that future research can be more accurate.