The problem of matching measured latitude/longitude points to roads is becoming increasingly important. This paper describes a novel, principled map matching algorithm that uses a Hidden Markov Model (HMM) to find the most likely road route represented by a time-stamped sequence of latitude/longitude pairs. The HMM elegantly accounts for measurement noise and the layout of the road network. We test our algorithm on ground truth data collected from a GPS receiver in a vehicle. Our test shows how the algorithm breaks down as the sampling rate of the GPS is reduced. We also test the effect of increasing amounts of additional measurement noise in order to assess how well our algorithm could deal with the inaccuracies of other location measurement systems, such as those based on WiFi and cell tower multilateration. We provide our GPS data and road network representation as a standard test set for other researchers to use in their map matching work. 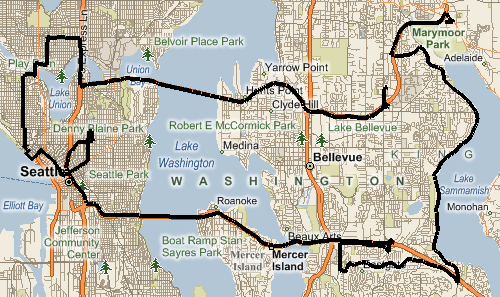 
Permission to make digital or hard copies of all or part of this work for personal or classroom use is granted without fee provided that copies are not made or distributed for profit or commercial advantage, and that copies bear this notice and the full citation on the first page. To copy otherwise, to republish, to post on servers or to redistribute to lists, requires prior specific permission and/or a fee. ACM GIS ’09 , November 4-6, 2009. Seattle, WA, USA © 2009 ACM ISBN 978-1-60558-649- 6/09/11…$10.00.

Pillars of the Eagle Nebula in Infrared